Mumbai: Actress Kareena Kapoor Khan has shut down pregnancy rumors with her latest Instagram post. It has been speculated that Kareena, who is currently vacationing in Europe with her husband Saif Ali Khan and her sons Taimur and Jeh, is pregnant after one of her photos went viral in which her baby bump she looked like a baby bump.

Refuting such rumours, Kareena took to Instagram and posted a hilarious note. 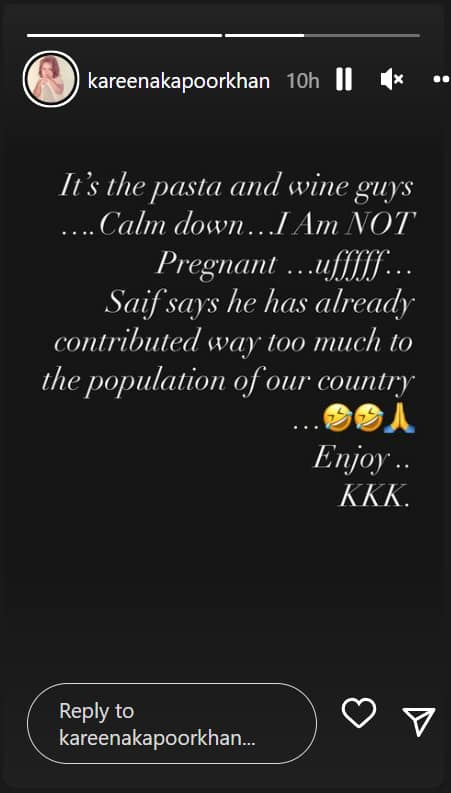 “It’s the pasta and wine guys…calm down…I’m not pregnant…ugh…Saif says you’ve already contributed too much to the population of our country…enjoy…KKK,” she joked.

Saif and Kareena got married on October 16, 2012. The couple had a simple court marriage and then an intimate wedding with all of their closest family members in attendance. They welcomed their first son, Taimur Ali Khan, in 2016 and their second son, Jehangir Ali Khan, was born in February 2021.

Saif was previously married to Amrita Singh, but ended their 13-year relationship in 2004. He shares daughter Sara Ali Khan and son Ibrahim with her.

On the work front, Kareena will next be seen in Aamir Khan’s ‘Laal Singh Chaddha’. The film is an official remake of Tom Hank’s ‘Forrest Gump’. The film will hit theaters on August 11. The ‘Jab We Met’ actress will also make her OTT debut with Sujoy Ghosh’s ‘The Devotion of Suspect X’, which is based on a thriller of the same name. Jaideep Ahlawat and Vijay Varma are also part of the murder mystery.

— The story has been published from a wire feed without any modifications to the text. movieloading.com is an automatic aggregator around the global media. If you are the owner of the content and do not want us to publish your materials on our website, please contact us by email – at [email protected] The content will be deleted within 24 hours.

Shah Rukh Khan enjoys a delicious meal at an Italian restaurant in London, poses with the chefs: PHOTOS | people news